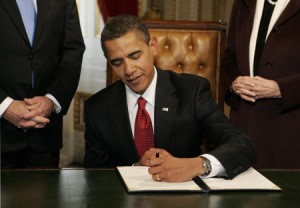 If you answered “they are all left-handed,” right on, because these famous men and women are among the thousands of left-handed people who have left their mark on the world.
Right-handed people rarely think about which hand another person is using, but lefties are quick to spot.

I was born left-handed, and still I am. :-) I don’t know why, I suppose there’s something about the way my brain is wired that makes me more comfortable taking a pen or a knife in my left hand than in my right. I’ve never been called a devil-worshipper or a communist like some left-handers. Sometimes I struggle with tools that were designed to be used in the right hand; right-handers tease me for my clumsiness, although I’m sure they’d fare even worse with tools designed for the left hand. I have personally seen people forcefully handing the pen or pencil into the right hand of their child just to make sure he becomes a right hander.

Here I gathered some possible advantages of left-handedness:-)

Some studies have shown that “…left-handers also tend to have unusually good visual-spatial skills and the ability to imagine spatial layouts.” Santrock goes on to point out that mathematicians, musicians, architects, and artists are more commonly left-handers than would be expected. “Also, in one study of more than 100,000 students taking the Scholastic Aptitude Test (SAT), 20% of the top-scoring group was left-handed, twice the rate of left-handedness found in the general population (10%). Left-handedness may also reduce the risk of developing arthritis.
Other reported associations include with higher creativity, a larger corpus callosum, certain right brain regions being larger, shorter transfer time of information between hemispheres, and higher socioeconomic status. 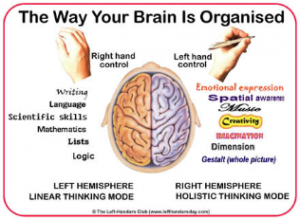 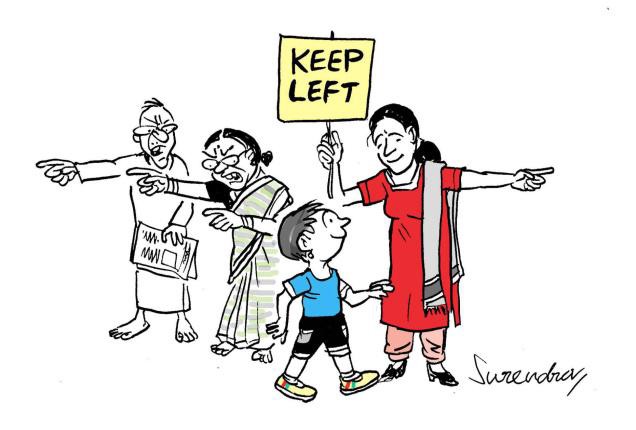 There are a few actual facts about lefties that I found surprising when I started looking into this whole left/right thing:

• Left-handed people are three times more likely to become alcoholics than right-handers.
• According to one study, left-handers life span is 9 years less than right-handers — which makes perfect sense considering they are three times more likely to be alcoholics.
• Statistically speaking, the older a mother, the more likely she is to give birth to a left-handed child.
• If both parents are left handed, 50% of their children will be left-handed, however if both parents are righties, there is only a 2% chance the child will be left-handed.
• Lefties are twice as likely to be male.
• Lefties tend to reach puberty 4 to 5 months later than right-handers.
• As a result of living in a right-handers world, 50% of left-handers report using a computer mouse with their right hand, 68% of lefties use right handed scissors, and 74% use a dinner knife with their right hand.
• Lefties also adjust to seeing underwater quicker.
• 1 in 4 Apollo astronauts were left-handed.
• 4 of the 5 original designers of the Macintosh computer were left-handed.
• Lefties with a college education make 10 to 15% more than their right-handed equivalents.
• Plus, we even have our own day! Left Handed Day is celebrated each year on August 13th, which is pretty cool.