The software giant’s search engine gets an entire new look along with new features.

Microsoft is giving its Bing search engine an overhaul to better compete with Google.

Like Yahoo earlier this month, Microsoft unveiled a redesigned logo for its search engine, along with a refreshed, modern homepage design. But Microsoft’s changes go beyond the cosmetic by introducing new features and tweaking existing ones.

One of the keys to Microsoft’s new approach is Page Zero, a new search function that aims to help users get a useful response to their query before they even see a traditional search results page. Building on to the traditional autofill suggestion that appears as users type their queries, Bing will also instantly provide relevant information and options for exploration as users input their query.

“For example, if you type Bill Gates, we understand what you’re looking for before you’ve even searched and give you a quick glance of who he is and suggest other popular search tasks associated with him,” Lawrence Ripsher, Microsoft’s general manager of user experiences at Bing, explained late Monday in a company blog post detailing Bing’s new features.

For “high-confidence” queries, in which it’s certain it has clear data related to a user’s intent, Microsoft has created a new area at the top of the page called Pole Position. The new feature presents detailed information such as current weather conditions in a particular city in larger, integrated presentation at the top of the page. 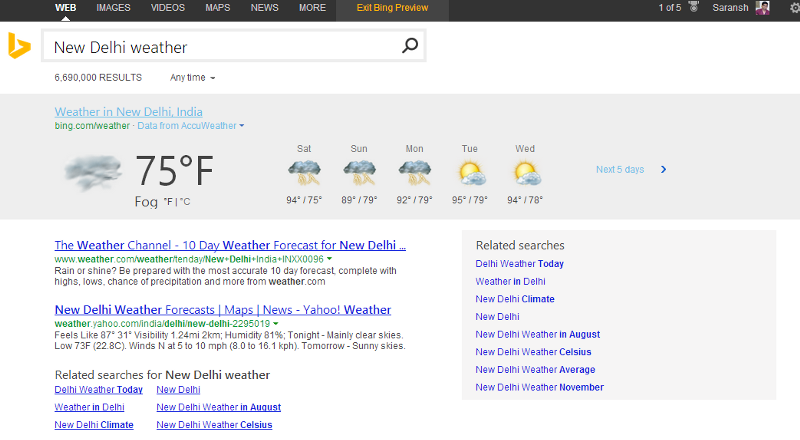 The site is also making modifications to Snapshots, the at-a-glance answers to queries about people, places, and things introduced last year. The redesigned feature has been combined with Sidebar, which provides Knowledge Graph-like information from users’ social network contacts.

A new logo for the search engine is also part of the company’s strategy of spotlighting Bing as being the baked-in search engine that powers a variety of Microsoft products, including Office and Windows 8.1. The strategy shift is aimed at closing the gap with Google, which in August accounted for almost 67 percent of U.S. searches compared with Microsoft’s 17.9 percent, according to market researcher.

Overall, the new Bing is an awesome experience. Just give it a try!