I was returning from Dublin, Ireland to New Delhi, India and had to change flights at Abu Dhabi, UAE. It’s a long journey of around 15 hours, approx 8 hours from Dublin to Abu Dhabi and a further 4 hours from Abu Dhabi to Delhi with around two hours to change flights (and terminals). I hadn’t slept from past 2 days as my flight was to depart from Dublin at 8 am on 27th September, so the agony of missing my flight kept me awake. Moreover, I was travelling non- stop across the parts of Wild Atlantic Way with my housemates for three days just before I left Ireland, so my whole body was aching badly (travel + hangover + jet- lag) and I can’t sleep on the flight.

I have travelled extensively from the same route over 2 years and know the shortest path to reach the gates at Abu Dhabi. After I landed, I quickly passed the security gates, made my move from terminal 3 to terminal 1, reached the gate where my New Delhi flight had to take off, all without looking at my boarding pass. My flight had to take off at 22:20 and it was 21:00, so decided to take a power nap on the seats near the gate.

I woke up shortly after and saw the boarding started. Since I was in no hurry, I thought of boarding in the end and dozed off further. And shit happened! After 90% of flight checked- in, I went to the counter and the staff denied my entry, I reached the wrong gate! It was then I realised there were two flights to the same destination at the same time. I don’t remember exactly but I was at gate 5 and had to reach gate 40, with 30+ gates in middle to cross!

It was already 21:40, I was at wrong gate, with a thick Zara coat (I planned to save luggage space and it was cold in Dublin, whereas I was roasting in Abu Dhabi) and approx 7 kilos of hand luggage, a laptop and duty- free alcohol (Jameson’s from Dublin) and I feared that my flight will leave without me!

If you’ve been to Abu Dhabi airport, you must be aware of the lack of space due to a lot of crowds and duty-free shops spreading across the airport.

So, I was in a situation of fight-or-flight (really!). On my way, I asked an airport staff about my gate number, and he replied there is no benefit to run as my flight had finished boarding. I ran like I never before, along with the stuff mentioned above, as I didn’t want to leave anything behind. It was the first time I saw a similar situation as in movies. My name was flashing on screens across the gate, “LAST CALL! SARANSH AGARWAL!”. All I saw was an empty gate, pitch dark outside (I saw no plane) with an airline staff shouting where was I? I was not in a condition to respond and was sweating profusely. I gave him my boarding pass and passport and almost crashed on the door when he asked me to jump on the empty bus standing outside the gate.

I jumped on the bus, panting and sweating profusely. I took off my coat, wiped off sweat with a handkerchief (my mom always insist me to keep one, thanks Mom). The driver took me to the flight, on which they’ve already started disconnecting the stairs. I shouted to stop them, jumped on it, saw someone else sitting on my window seat, which I reclaimed forcefully!

Apparently, my seat was just before the emergency exit, so I can’t recline my seat (see picture below). Moreover, the guy sitting in front reclined his seat fully and I had almost zero leg space to myself. I remember that I had trouble walking the next day.

Now, it seems funny, but it was a hell of an experience I had at the airport. Now, I always check my boarding pass multiple times. 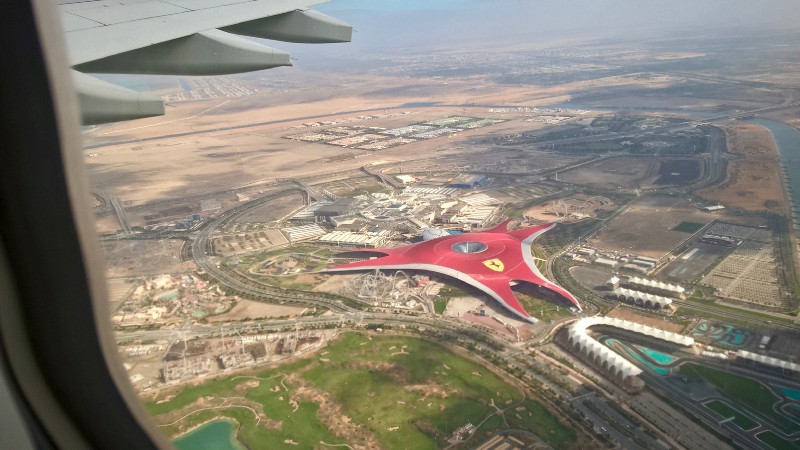 This story was originally published on Quora as an answer to What crazy experience have you had at an airport or on a flight?